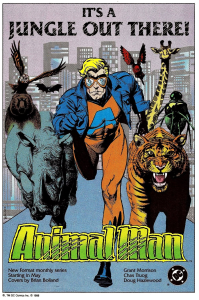 As a big fan of Comic Geek Speak, I am especially keen on any BOMC that covers Vertigo or new Image books.  One of their earlier one was the first volume of Grant Morrison’s Animal Man, which is up through issue #9.  I recently piled through the Animal Man Omnibus, which takes us through the entire Grant Morrison run(through issue #27).  I thought I would jump into it there, and there was both some deep analysis and some very serious disdain.  I stand by the depth in the work itself, but I am not sure that the first nine issues themselves really stand out that much.  I fundamentally disagree with the naysayers around issue #5, where I thought the Looney Tunes and messianic motifs really worked.  This is actually the best it was the first five issues, a theme it returns to heavily in the last seven as it enters its deconstructionist phase.  Either way, this episode was a great addition, as with author of How to Read Superhero Comics and Why.  If anyone is interested in the third generation of superhero comics, marked by post-structuralist and reconstructionist themes, his work is essential.  I obviously lean this way since my obsession is with Vertigo, especially the early years.

Check Out How to Read Superhero Comics and Why