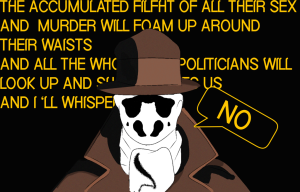 For the signifier is a unit in its very uniqueness, being by nature symbol only of an absence.

Common conceptions about communication rely on it as a symbolic mode. This is to say that a thought is conceptualized, encoded into a series of symbols, relayed to the audience in some way, and then decoded by that audience. The assumption it then that the meaning that existed before the process of encoding and decoding has transferred to the audience in some essential way. The symbolic codes that we do use to convey meaning do take a number of forms, some of which are in the form of language and others are images. It may seem logical to separate these as being wholly different, even suggesting that the image is not a symbol for an object but a representation, but both exist as purely symbolic. As we look at a word we construct an image of what that word could be indicating, and as we look at an image of an object we then create a multi-dimensional sense of the object that image represents in our mind. “Word and Image”  by W.J.T. Mitchell outlines an analogy between the word tree and an image focused symbolic representation of a tree, both of which force us to think of a tree. The difference, this analogy presents, is that the image could be decoded to represent a different object depending on the specific construction and context. The word could be done so as well, but both create this lack of a universal interpretation in different positions. In this way they both share the characteristic traits of symbolic communication, but cannot be understood as fundamentally the same form of symbolic communication.

In the graphic novel form we are presented with both of these forms of symbolic representation at once, intertwining with each other. Since these both have a codependent relationship, where the image conjures up associated words and a word may bring up several images, there is a way for these to play a unique and relative role to each other.

What we start off in the Watchmen is a number of textual objects that exist in the background, which is only indicating that they are not of primary story importance.   This can come in the form of the text on a sign carried by Walter Joseph Kovacs or the text that has been spray painted along a brick wall. All of these exist as part of the world conveyed by image, but they build upon our textual understanding by giving us this type of communication inside their story space. The text as we read it does not exist inside their story space as they do not have the ability to visually see their dialogue or thoughts, but they do have the ability to read these textual moments. This is solidified by the inclusion of Rorschach’s journal as a main narrative feature that, though no characters actually read, still exists in the story space (This is legitimized when it is sent to the New Frontiersman, but then remained privileged to the audience when it is rejected for publication.)   What this does is create a second level of commentary where reading text that exists within their personal context becomes part of the way we understand the characters and the story.

This goes several steps further when we are presented with the supplementary content between the chapters where the text is not presented in a bibliographic form established by the format of the comic, but instead in its “original” form as it exists in the story space. This allows us to read the text purely within the context that it would really exist, but also to have a distance from it since it is actually a step removed from the narrative that we have begun to understand. This helps us shift the focus of our viewership from watching a string of characters to looking at the entire book as a collective document, only because of the context it is placed in. The comic book illustrating the story of the pirate continues this trend, and it is given a self-aware character by lowering the general resolution of those “comic” images and bringing up visual characteristics that are generally associated with the comic book medium.

All of these additions have text, but are primarily images. The text from them we do read, but only in the context that they are images taken out of the story space. This means that the characters have the ability to look at the text as an object, which is why it is a fundamentally different form of communication than what we have when we read the general text of the dialogue.

The images themselves use a series of patterns and visual indicators that are unique to the medium. The images along with the text allow us to be presented with a subtext about characters, motivations, context, intensions, and so on, but this could also be present in formats like film. What sets this apart is a much more complex series of image constructions that exist around our ability to look back and forth over the image. This is where symmetry in imagery, the color patterns, the subtle imagery that is only suggestive of later plot points, as well as cultural symbols can exist in a way that is allowed to remain subtle because you can look back on it.   In all these situations this is paired up with the development of characters and events, which has text as its foundation. The symmetry, for example, allows us to see parallels in the behaviors seen both at the beginning and end of the story. The color patterns draw in and accentuate what is a increasingly alienated point of view we get through Rorschach’s journal. All of these have the ability to draw from different artistic traditions, aesthetic points of view, and cultural indications, and through the text exist either in context or juxtaposed against what our interpretation would be. What this presents is two essential undercurrents that on their own would give a much different interpretation of evens, both in basic physicality and interpretation. Together they create a hybrid that is a fundamentally new machine and with which the experience cannot be isolated to either type of symbolic communication. 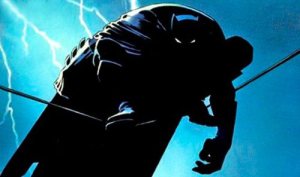 The Dark Knight Returns presents a different visual pattern and tone than The Watchmen, but both are centered on a metropolis in crisis. The Dark Knight Returns presents a similar element to the series of books, journals, and papers used in The Watchmen in the form of television media coverage. This does not present the same recontextualization of text as these elements in The Watchmen as they are through a television and therefore their words cannot exist as textual objects.

Instead, what we see is a shifting set of narrative perspectives in the different presentation of text. The media influence is presented only alongside a television monitor, which tells us immediately that this text is to be understood as commentary and not as primary. This is distinguished between much of the isolated text on colored backgrounds, which tend to be associated with elevated individuals such as Superman or Batman.

This shifting presentation of text is in perfect context with the consistently shifting imagery in The Dark Knight Returns, which does not only shift the perspective constantly, but also changes artistic style continuously. This could be the use of heavily saturated dark color patterns that then shifts to a white-dominated frame, or it could be a change from a naturally depicted human character to one that is grotesque in appearance. The essential visual point of view is one that is never consistent, which reflects the constant changes in point of view and perspective.

If the image and character of the text consistently changes in this fashion we are not allowed to view either one as consistent, even within the specific context. We understand Batman to be the main character, yet this interplay suggests that the experience of others is equally valid. This includes sidekicks who are generally seen as inferior, the non-heroic characters, and those that exist as villains. As this perspective in text position and image description changes we are thrown into a post-modern malaise where our ability to identify with heroics, and therefore a sense of declared “right,” is out of balance. It is this concert of text and imagery that develops this sense of chaos and, in many ways, legitimizes Batman’s later military actions to maintain order.

The images in The Dark Knight drive the narrative more than the text does as this is not expected to shift quite as often as it does, which makes its shifts more devastating.   The text must follow the imagery to legitimize it, even though its narrative is not always directly dependent. An example of this is the internal narrative of Bruce Wayne himself, which is not always changing with the influence of the imagery. This often times remains consistent as a meditation on his values and worth, though being paired with constantly changing images of violence. This leads us to then understand the persistence of his ideas, even if we do not always continue with his point of view.

The shifting art style also allows the image of each of the characters to change even when the associated text does not. This can bring out Batman’s age when it feels necessary, highlight the inherent kitsch of Superman and also allow him to return to a more human form, and essentially play with the gender display of Robin. This new presentation then alters are perspective of these characters and, in direct lineage, changes the context in which their text is presented.  This also plays to the way that the media is portrayed as a shifting perspective on the moral dimension of each character’s choices, as well as their place in the larger society.  Here word and images are paired in very specific ways to set the collective mood for a response to each action.

Both of these books interplay text and image in a lot of ways by allowing one to set the context for interpretation of the other. Image and text both play on separate sets of underlying assumptions, biases, and understandings in the reader and therefore allow for the kind of presentation that is wholly unique.