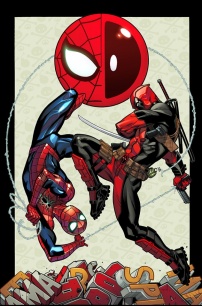 Marvel’s massive list of new series for after Secret Wars wraps up includes a number of spider-man titles, both inside and outside of the traditional continuity.  While these titles have been announced, there really has not been much more known about these new series.  At this year’s San Diego Comic Con they released a few tidbits of information that we can latch onto, but they are still just crumbs while we wait for the entire line-up to drop.

So what do we know now? 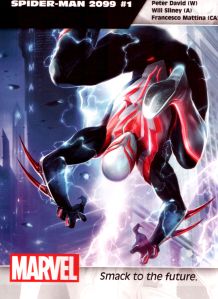 1. The flagship, Amazing Spider-Man, will be released on October 7th.

2.  That series will include Parker industries going global in four major cities, including New York.

3.  Norman and Harry Osborne are coming back, both as employees for Parker Industries.

4.  The Ultimate Universe’s Spider-Man, Miles Morales, will take over the regular Spider-Man series.

5.  Spider-Man is intended to be the classic take on Spider-Man, except with Miles instead of Peter.  This means the “teenager coming to terms with their superheroness” will be at play here.

6.  Joe Kelly is bringing his Deadpool street cred to the new Spider-Man and Deadpool title.

7.  Venom: Space Knight will follow Flash as he adventures completely solo from his normal team-mates in space.  This will include getting deep into the symbiote history.

8.  Spider-Gwen will, as expected, look at the history with Peter, and she will get close to the Norman Osborne of her unique corner of the Spider-Verse.

9.  Spider-Man 2099 is not just going to be a future title, but one that will be time jumping and interact with the flagships.

10.  We can expect a more personal story from Silk, though some interaction with mainstay spider-characters will still happen.  This is intended to be much more of a character piece, where backstory and personal story will be just as important as supertheatrics.

11.  The Spider-Woman reboot will focus on her as a parent while remaining a superhero.

12.  Spidey from creator Robbie Thompson is going to be an “intro book” with a teenage Parker, comparable to the Miles Morales storyline.