So it is official now.

For the last year or so there has been rumors that this could happen.  Originating in the difficulties with 20th Century Fox, who owns the rights to the X-Men and the Fantastic Four.  The Fantastic Four stopped being a team recently and were dispersed during the new relaunch.  The thought was that this could happen to the X-Men, and the Inhumans have been pushed as an alternative to the mutant world.  With the new storyline that looks like it could mean that the Inhumans’ Terrigen mist could kill mutants and stop then being born, it looked like this could be on the horizon.

So let us get the announcement straight.  It is not that Marvel is killing off the X-Men, but that no more mutants and X-Men will be added to the existing line-ups and character rosters.  With the Terrigen mist they cannot be born, and they are going to be generally phased out to some degree.  The announcement has come down from Marvel, but it is also in panels from the upcoming Extraordinary X-Men #1 from Jeff Lemire: 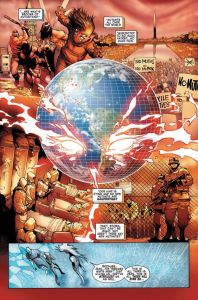 These issues are not new to Marvel readers as we have seen the entire focus of Marvel move from the 1990s favorite The Uncanny X-Men, to the Avengers and independent heroes.  We can expect the future of Marvel to be tied directly to their movie properties, which is tied up with their ownership from Disney.  It is just unfortunate that a feud with Fox was strong enough to make Marvel eliminate such crucial parts of their past.