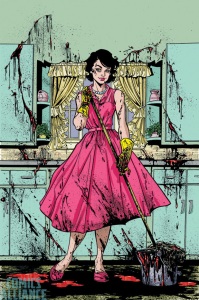 The recently released title Lady Killer has been a much promoted launch, which is going to be important as Dark Horse continues recovery from the surgical removal of their Star Wars line.  They were bringing the first issue in with some style with a signing and “cocktail party” at Things from Another World, which is a Portland based comic shop that is owned by Mike Richardson and Dark Horse.  Here the entire creative team was available for signing, including Jamie S. Rich, Joelle Jones, and Laura Allred.  All of these talents are in top form as this first issue is a fun and ironic take on the fifties housewife, paired up as a contract killer.  The art is both sharp and chaotic, and Laura Allred’s colors are in top form as she makes both the campy picturesqueness of the Americana and the horrifying brutality pop.  The story is clean and charming, though obvious at times, and should promise to be fun as it continues on.  Both Rich and Jones will be at the upcoming Wizard World Portland signing comics, and if Lady Killer is any evidence, then Joelle Jones will be a worthwhile and hot creator to get sketches and commissions from.  Hopefully Dark Horse continues to carve out an indie space for themselves with comics that would have fit well at Vertigo less than a decade ago.