People are more and more “waiting for the trade” in comics, where they get collections of a given regular comic release that contains a full story-arc. The reasons for this are numerous, one main one being that stories are very heavily serialized now and work the same way that premium television dramas work where you need to watch them all to understand what is happening. This means that you cannot miss an issue and that the plot and characters may be so detailed and complex that having a month gap in reading may leave you to forget what just happened. The price of comics and their location only at specialty shops also does this, as well as the trend towards certain comics at Vertigo, Image, and Oni to go to non-comics readers has lead to trade paperback collections to be a really strong part of the comics market.

Now that summer is coming, you may be ready to get caught up on a series that you have not had time to read all year. This leaves the trade as the perfect option, and many of our favorite companies will be releasing some of their most anticipated collections this summer. Here is a look at what you should be checking out this summer that will be released while the sun is high.

This is both the last issue of Fables and its last trade. It is capitalizing on and recognizing the important role that trade sales had in the creation of the Fables market. This final issue has been delayed for quite some time since Mark Buckingham and Bill Willingham working on it for months on end. On July 22nd it will finally be released, and will appear as one continuous graphic novel that is a full 150 pages. What a great way to end one of the best series of the 21st century!

This is going to be the first collection of the Vertigo Quarterly anthology series that is helping to rebrand Vertigo comics. This will include four different issues, each representing different colors that make up the comics printing palette. This will include short stories from amazing creators, with a heavy lean towards science fiction and horror stories. These are all amazing contributions, each acting as self contained tales and really showing the depth that you can have in the alternative comics field and showing off exactly what kind of contribution Vertigo has made.

Scott Snyder’s Wytches has come to a close, with the six issue run seeming like it is end just there. Whether it actually is or not, this has made up one of the best horror runs in recent years where a story about an indigenous species of frightful parasites exist as Wytches, and the story of the young girl and her family who has to deal with them. Snyder mixes with an amazing art and color palette to tell the kind of horror story that actually takes advantage of the medium.

For those who have been reading this android romance story, this will be the final five-issue arc that will close up the miniseries. This has been an amazing take on the “robot love” story that has been popular lately. It looks at the character Alex who receives the android, Ada, as a gift, and after deciding to free her mind from the internal controls set, they fall in love against the wishes of the government. A great series of characters and ideas that will keep you stuck through the final page.

Bitch Planet has been one of the best new series in the last couple years, drawing on the exploitation films of the 70s to tell a story of a futuristic space-prison for women. Explicitly challenging gender from a Feminist perspective, Captain Marvel’s Kelly Sue Deconnick is crafting incredibly rich and real characters that are driving the kind of story that has real last power. It is also coming in with the Image introductory price of $9.99, which makes it an easy title to jump into!

Stories of a strange small town with murderous secrets has become a really common storyline for indie publishers lately, yet most of them stand out with their own unique flair and crisp art and storytelling. The same is true with Postal, as an autistic postal carrier starts investigating a murder and sees that even he has a bigger history that he could have ever guessed. A great story that has been going for a few months, and worth starting in on the first trade with since it again comes in on the reduced $9.99 price tag.

So the four issue chrononauts miniseries(or possibly just first arc?) was making headlines before it was even releaed because it had been optioned for a big-budget Hollywood adaptation. Following to slick characters given the power of suits to travel through time with, one goes renegade and creates a home in several points in history where he dominates socially and romantically because of his superior access to technology. They eventually get reined in and go to war with their keepers, all of which done with a rye humor that reminds us of many of the buddy comedies we are used to. A great read at a great price!

East of West The Apocalypse: Year One

If you have always been interested in getting into Jonathan Hickman’s sci-fi apocapystic epic and havn’t, then this is the way to go. This is going to be an oversized collection of the first three storyarcs, comprising issues #1-15. This is an amazing run that tells the story of archetypal characters both fighting for and against the end of the world. This is classic Hickman, drawing on mythology and folklore to create a fractured story of romance, betrayal, and existential violence. This may be a little pricey at $49.99, but also promises to be the best way to read the series.

This is bringing back the classic Vertigo series from a few years ago. Scalped takes place on a Native American reservation after a former resident returns as a covert FBI agent to investigate the goings-on at the local casino. This story from Thor’s Jason Aaron has been designing for the more recent Vertigo runs and is going down along with classic series like The Sandman, Preacher, and Fables. This new release includes issues #12-24 and will be presented in a nice hardcover edition.

Swamp Thing: The Root of All Evil

This is again a throwback from Vertigo collecting the Grant Morrison and Mark Millar runs on Swamp Thing from the early days of Vertigo. This collets issues #140-150 starting with Alec Holland’s awakening in the hospital in South Africa. These are essentially considered the “lost issues” from this series that have yet to be collected, and a great collection if you enjoy those Swamp Thing issues that defined a generation of comics and started the career we know for people like Grant Morrison.

Free Country: A Tale of The Children’s Crusade

This will continue Vertigo’s commitment to making their entire library available to new generations of readers. There is only one crossover event in the history of Vertigo, which is call The Children’s Crusade. This collection has not been put into trade before, and the story from Neil Gaiman and others brings together the classic focus on imagination and fantasy that Vertigo really built its tradition on with books like The Sandman and Books of Magic. It collects both issues of The Children’s Crusade, has a new chapter from Toby Litt and Peter Gross, and a new introduction by Neil Gaiman. This trade is also kind of cheating since it is actually released in September. So sue me. 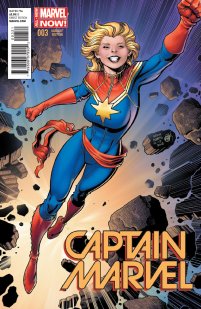 This is the third trade collection of Kelly Sue Deconnick’s endlessly fun Captain Marvel series, that takes her to space and consorting with the Guardians of the Galaxy. This collection also includes issues from The Black Vortex crossover, but can easily just be read on its own. One of the best examples of light superhero books with strong female characters being published today.

Gotham by Midnight is one of the great examples of the diversity that has happened around the Batman titles over at DC. Here, Ray Fawkes is creating a strange horror inspired series with the landmark mix of sketch and watercolors that has defined Ben Templesmith’s work. The first storyline, which focuses on Jim Corrigan as a supernatural investigator, was interesting and followed up on the events of Batman Eternal. You do not need to read any other Bat-title to read Gotham by Midnight, but if you do it just adds another element!

Ok, so this one’s another cheater. It doesn’t come out until September. Whatever, it will still be hot out. This was one of the best miniseries of the year, bringing together a simple yet incredibly effective story with some of the most breathtaking art that we have seen in years. Blood splatter is tremendous as this 1950s suburban housewife doubles as a skilled assassin, but then wants out. Everyone on this book, Jamie S. Rich, Joelle Jones, and Laura Allred, are all in full form as they put together some of the funnest five issues I have read in a long time. This miniseries cannot be supported enough, and reading this trade collection will be a great use of an afternoon. Get in the sun, pour some ice tea, and soak up some Americana and ultra violence.

Just had to throw in another great image from Bitch Planet, which never misses a chance to use ironic Americana as a way of confronting systemic oppression.