Arthur Suydam, who many know from his work on Marvel Zombies, has always been a divisive figure in the industry.  At comic cons he is known for having massive spreads where he sells prints and original art.  This, while excessive, is not really that new for comic cons, and many major artists have been set ups to sell art.  The difference is that Suydam doesn’t pay for his and instead just steals other creators’ tables.

In a series of call-outs that happened online through Twitter, he was repeatedly singled out for his behavior in Montreal, and at past conventions. 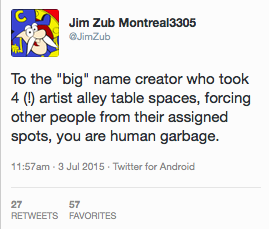 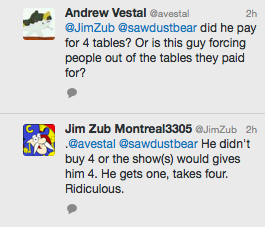 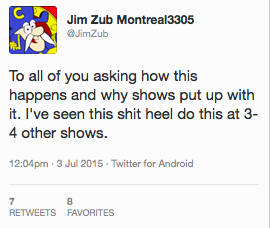 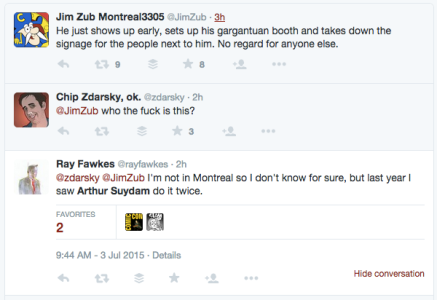 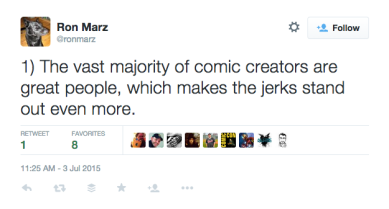 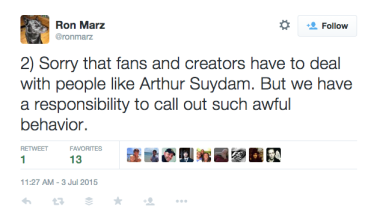 Mark Waid, who is known for his estimation of fairness in the industry and is a notoriously nice guy, had enough of Suydam’s behavior, which is common to many comic cons. 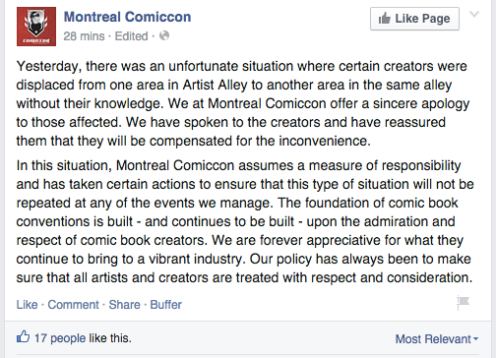 It was nice for Montreal to take the high road.

When asked about having her table stolen by Suydam, Rachel Richy told Bleeding Cool:

I learned about what happened from another creator who had been sitting across from where we were supposed to be and who watched the signage change overnight as Arthur replaced it for his own. It wasn’t until I realized the implications of this change that I became a bit frustrated. As a smaller creator/press I rely on being found in the program as accessibility drives most of my sales. And it’s a pretty selfish move to think you are above the convention that invited you and that you are more deserving than your colleagues. Having said that, it was not my intention to have him ostracized. After all, if this is Arthur’s habitual behaviour, it’s our collective responsibility to make others aware of it. Judging by the wave of support from creators and friends on Twitter, that’s exactly what is happening now. Also, Montreal Comic Con is a FANTASTIC convention, and I firmly believe they were not aware he was this kind of creator until it was too late. They’ve also been very present in trying to help sort out the situation. All in all, I’m not angry at Arthur and especially not the convention. I’m just glad Arthur’s practices are becoming more common knowledge so that he might be prevented from negatively influencing or effecting other’s sales or experiences in the future

The same questions were posed to Francis Manapul, one of the other table-losers:

To be honest I wasn’t aware of the situation until more than half way through the first day. I was shown to “my” table by one of the organizers who I know to be a really great guy. I asked how his day was, and he let on about a disastrous situation. He seemed stressed out so I didn’t press him, and just pointed out that there’s nowhere to go but upward. When I got to my spot I saw my nameplate on the table, rather than hanging behind like all the other creators’ nameplates. I didn’t think much of it and since there wasn’t a line I took the opportunity to say hello to fellow creators. During that time Rachel put up my banner and a line had formed so I sat down and proceeded to sign books.

Throughout the day I got a lot of confused/relieved people who approached my table and told me tales of their long journey. I just replied my location should be in the book. Unbeknownst to me was that I was actually in the wrong spot because I had been displaced by Arthur. I just thought, “weird”. Rachel and some other creators made me aware that the previous night, Arthur had taken down my name along with her own and Dan Parent’s and moved us to another location in order to set up on ours.

My reaction was honestly mixed as I thought the whole thing was just so bizarre. Seriously, who does that? It’s like coming home to find your neighbour parked in your driveway. So I told Rachel I was going to talk to him, but she didn’t want me to ruffle any feathers so decided not to…

Less than a minute later I was on my way to his table. I just couldn’t let it stand, even though Dan and Rachel were already set up and didn’t want to rebuild again. However it’s the principle of the matter, and I wanted him to know that it wasn’t cool. I was still confused whether I felt angry or, much like the guy who finds his neighbour parked in his driveway, generally perplexed. I was thinking “something’s just not right about this guy.” His behavior didn’t make sense.

I got up to the table and simply said “Hello” to which he very politely and quite cheerfully greeted me. I was caught off guard as this nice, older man spoke to me in a polite and respectful way. Now anything I said that wasn’t as polite in return would make me look like a total asshole. So I just said “Hey dude, this is actually my table you’re sitting at. You look pretty set up here so that’s fine. However I’ve had a lot of people telling me they’ve had a very hard time finding me. So if you see confused bystanders around your booth would you be able to tell them my location?” which he agreed to do. The whole thing just felt weird, because he neither apologized nor broke character of his polite demeanor. He didn’t seem to be aware of any wrong doing he had done and at this point I just wanted solutions rather than an argument that went nowhere.

The con organizers have been nothing but accommodating in addressing the situation and making us very comfortable in our new location. At the end of the day, it sucks that he did it, and I can see how this type of behavior can very negatively affect the business of those he displaced. On the other hand, it’s a good anecdote to tell over some beers at the bar. And apparently Twitter. I also wanted to take this opportunity, Rich, to announce that Arthur and I are launching a creator owned book together. It’s a buddy cop comic. Just kidding. 🙂

This is not the first time that people have complained about Suydam’s behavior.  The Outhousers reported a particularly difficult episode with Suydam where some small time convention planners were royally screwed by him.

I’ve got an Arthur Suydam being a dick story myself. Back in 2011, Suydam was scheduled to be the featured guest at the Asbury Park Zombie Walk, but booked himself a sweeter deal at theMid-Ohio Comic Con instead. We were nice in our report about it because the Zombie Walk organizers didn’t want any trouble, but in actuality, Suydam didn’t let them know about the double booking until the last minute, and only after they asked him. They actually found out from me two days before the show that Suydam was scheduled for the Ohio con on the same day.  Suydam sent his assistant to Asbury Park instead.

Suydam is also not famously very nice to fans and other creators.  At cons he is one of the few creators who does not sign for free.  Instead, he sells his prints and requires you to buy something before he will sign books.  Many artists charge around $5 to sign a comic, which in and of itself is kind of uncommon and unpopular, but even that is better than being forced to spend $30 on an annoying print.

Thanks to The Outhousers for their reporting on this, and for running a great news site!