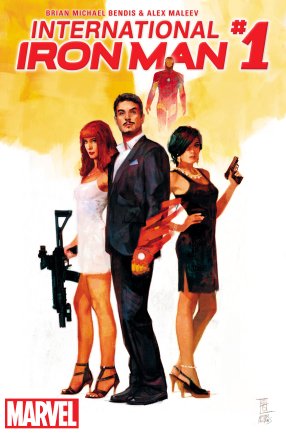 For the next couple months there will be tons of “#1s” coming from Marvel, with books like The Amazing Spider-Man #1, The New Avengers #1, Guardians of the Galaxy #1, and Sam Wilson: Captain America #1.  This is not where the new Marvel relaunch is going to end, as Marvel and writer Brian Michael Bendis announce the new International Iron Man.

The book takes the Iron Man franchise out of New York City and takes it across the world, with Tony Stark expanding his Iron Man operation into other countries and in other languages.  The book, written by Bendis and drawn by Alex Maleev of Daredevil fame, will be working on this book that will reflect a globalized world.

In a conversation with Entertainment Weekly, Bendis noted that this turn only makes sense for the world that we live in.

“I think we all, no matter where we are in our lives, feel that the world has gotten much smaller. We can all reach out to each other no matter where we are in the world. We feel each other’s pains and victories… I think for Tony it’s like that times 100. He’s much more aware of the global situation and how a big fight with Galactus in New York would affect things in other parts of the world. And yes, why do the villains always attack New York? Why is New York the house of Legos that constantly needs to be rebuilt? If I was a villain, New York is the last place I’d attack, because you know, just by math, there are 700 superheroes in a 17-block radius. I’d go anywhere else. We’ll be dealing with some of the criminals in the Marvel Universe who are smart enough to put that together in their head finally. Tony’s gonna be racing to help people that don’t necessarily always get the attention of the Marvel superheroes.”

While the idea is to take the story space out of the U.S., the book itself will also be going internationally.  Marvel will be using it to expand its reach as International Iron Man #1 will be released in 40 different countries and will try to draw at different language and cultural backgrounds as much as possible.  Superheroes have been a real connecting point in global culture, so it is not surprising that they are making a great move like this.  Expect Hindi versions of International Iron Man to go for a bundle on eBay.