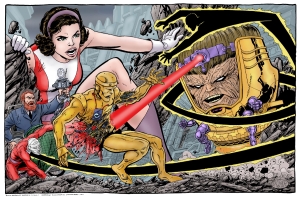 My Chemical Romance musician turned comics writer Gerard Way has been shopping around with publishers to see what his next big project could be.  In a recent panel he did with Charlie Adlard and Tommy Lee Edwards, an audience member asked directly about whether or not he considered taking on Doom Patrol at DC.  Rather than just a more bland answer, it looks like he has had this on his mind for quite a while.

The answer is that he has already given a pitch for Doom Patrol to DC Comics, with Becky Cloonan doing the art for it.  Cloonan, who people love from her online work Bandette, has already started doing character art for it.  The scheduling has not been made yet for it, and may people are speculating that this could be Doom Patrol: Year One.  We are hoping we see something closer to a continuation of Grant Morrison’s surreal Doom Patrol.

Way released his solo album only last year, so this will likely still be occupying much of his time before he is free enough to get behind a keyboard.  People will most likely associate Way with his miniseries The Fabulous Lives of Killjoys and his contribution to Umbrella Academy.