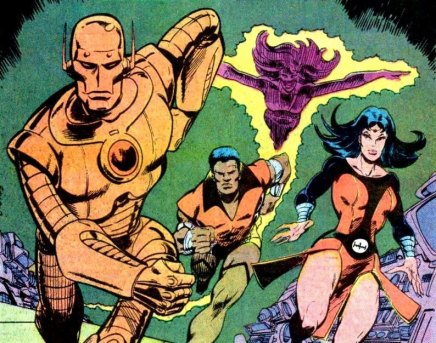 For most of 2015 we were waiting for rumors to be fulfilled about Vertigo Comics’ rebranding and new titles. The number of titles on the DC imprint had begun to shrink, and its most time-tested books like Fables and Fairest were ending. Vertigo, for its part, had not been nearly as popular as it had been for most of the 90s and 2000s, where it defined the alternative and “mature readers” comics. Now Image Comics had moved to the lead, bringing all the challenging genre and “creator owned” books that you would have previously been brought to Vertigo.

Then the final quarter came and we saw twelve new books launched, one of which, Lucifer, even heralded back to an earlier generation of Vertigo books when it had its own shared universe that was an adjunct to the mainstream DCU. Shortly after that, in early 2016, we started getting even more miniseries titles with The Dark and Bloody and the new Suiciders book, yet so many of these titles are miniseries that we may end up with only a few ongoing by the end of the year.

It looks like this constantly releasing books, especially miniseries properties from our favorite creators, is the new way of being for the Jamie S. Rich run Vertigo. Rumors have begun circling that along with the upcoming DC relaunch called Rebirth, Vertigo is going to get a secondary Rebirth of its own.

This new update is actually going to be a throw back to when Vertigo was such a success: the early 1990s. To start with, we will be seeing a new Doom Patrol book from Becky Cloonan and Gerard Way. This book had been rumored for quite some time as Gerard had been public about his choice to revive the odd superhero team. We always assumed, however, that this would just be brought back into the mainstream DCU since DC had brought all of their licensed characters that were on Vertigo back to the regular superheroverse. Swamp Thing, Constantine, and many others were now DC properties, yet they lacked the kind of strong adult readership that they had on Vertigo, so it could be that they are rethinking the decision that came with the New 52.

Beyond Doom Patrol, now slated for the end of 2016, we are expecting more Sandman spin-offs for characters from the original Gaiman series. Though Gaiman has said that he will no longer write any Sandman books, he has acknowledged that other writers can take up some of the other characters, such as the Thessally series done by Bill Willingham.

These books are slated to be released before Christmas, so we can expect to see big changes towards Vertigo. While we want to see them move forward conceptually, it is exciting to see what they can do with older properties and a shared universe. Will we see Swamp Thing and Hellblazer return to the imprint? We can always dream.

We are expecting to hear things to confirm this shortly at Emerald City Comic Con at the beginning of April.