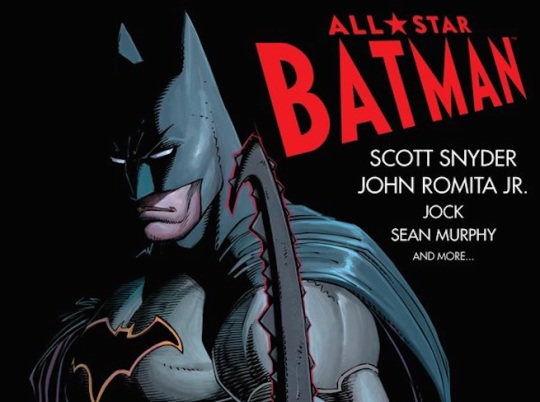 DC Comics must be thanking God for Scott Snyder.

Scott Snyder and Greg Capullo’s Batman has consistently been the most popular ongoing series for DC Comics, by a huge margin.  They consistently are able to compete with the most popular Marvel books, even when the relaunch was happening or the Star Wars books being released.  With the new Rebirth relaunch, many saw that Capullo was leaving DC to do creator owned work and were worried that DC’s wonder team was gone.  At least half of it has decided to stay.

It was rumored that Scott Snyder was going to be taking the reigns of Detective Comics, which was surprising after he did over fifty straight issues of Batman and two weekly series since the 2011 New 52 relaunch.  Now it has been announced that he will write the twice-monthly Batman series, All-Star Batman.  The series will feature a number of different artists including John Romita, Jr., Jock, Sean Gordom Murphy, Paul Pope, Tula Lotay, and a number of others.

Snyder intends on staying put as he has signed an exclusive deal with DC Comics and this new All-Star Batman series is going to be inside of the main DC continuity, not just an out-of-continuity spin-off.

This new series should be considered one of the leads for the new relaunch as Snyder is such a big name and his Batman has been such a character redefining turn that DC knows they can count on it.