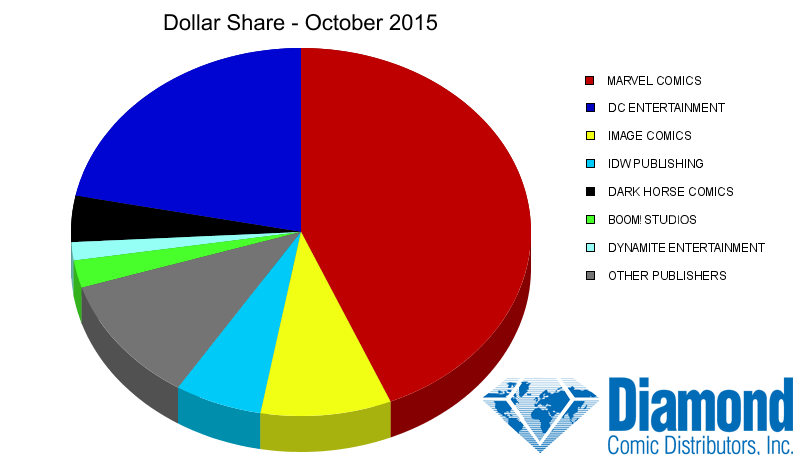 When looking at the sales numbers each month for comics, the first fifty or more books are mostly just Marvel and DC.  The “big two” have dominated comic book sales for decades, and even major indie publishers like Image Comics only have a handful of titles that even come close to Marvel and DC superheroes.  In recent months, DC has been fighting to keep up with Marvel, both in their Multiverse/Convergence event and the launch of those new niche titles.  It has been less than successful at this, partially because of all of the Marvel branding throughout other media, and DC’s general market share has seen a dramatic shrink.

Then October came, and the shrinking was somewhat unprecedented.  According to Diamond Distribution, DC’s market share in October 2015 was down to being less than a quarter of sales.  Marvel’s sales went up by a fifth, which actually made much of the difference, which means that DC’s sales were somewhat the same over this period.  What this really means is that any action from Marvel, in this case the relaunch of their major superhero titles, will disrupt the market so fundamentally that DC does not even end up looking like a main competitor.  This happened in reverse during the 2011 “New 52” relaunch, but that was a long time ago and now Marvel will have so many new titles, as well as Star Wars books, that it is difficult to see how DC is going to be able to keep up over the next twelve months.

These two wings, new popular Marvel books and their ultra-hit Star Wars books in anticipation of the new Star Wars movie, is what defines this difference.  You take away both of those and they are still competing head to head, but the problem is that Marvel’s exceptions are so much more naturally popular than DC’s that it still has the ability to crush them.  To combat this, DC will have to continue doing comic adaptations using the Cinematic Universe system, and also get some popular franchises in that can make the difference.