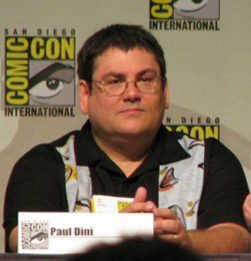 For those who grew up loving the landmark Batman: The Animated Series, then you know exactly the kind of work Paul Dini does.  Though it is often geared towards an “all ages” demographic, his work there and on Batman Beyond were wonderful and not only introduced new characters but even expanded the Gotham mythology.  He went on to work on major television shows like Lost, which means his geek-cred is only increasing(or decreasing if you watched the final season of Lost).

Now Dini is coming back over to Vertigo to do an Original Graphic Novel called “Dark Night: A True Batman Story.”   The book will look less at Batman in his world and more on Dini and his personal struggles to write Batman, similar to Steven T. Seagle and Teddy Kristiansen’s It’s a Bird.  His work is driven out of a brutal street attack he suffered, and the physical and emotional recovery that came later.

Speaking to Comic Book News, Dini spoke about this experience and how it drove him forward.

Batman is a character truly universal in his ability to entertain and inspire fans of all ages and backgrounds. As a writer of Batman stories for comics, video games and animation, I’m grateful for the opportunities I’ve had to contribute to that legacy. But there was a time some years ago when I found myself the victim of a violent attack and the last thing that made sense to me was to continue writing stories about a fantasy crime fighter. Struggling to recover, I found myself trapped in a dark place of isolation and abuse, plagued by demons both real and imaginary, with my only choices being to remain a victim or to stand up and fight back. Not so easy as the enemy I was fighting was my own fear.