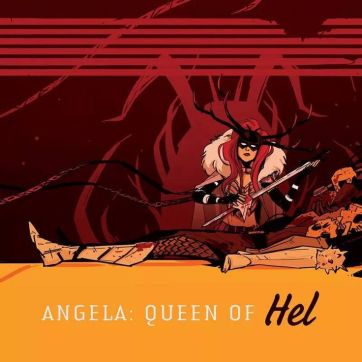 Marvel has done a good job of really going to the heart of comic books in a way that DC Comics was known for: going for its mythological roots.  With characters like Thor there was a detailed resurrection of Nordic myths from the Eddas, as well as building on them with other mythological characters as well.  The recent addition of Angela as a regular character of the pantheon is a nice growth for the universe, especially since this was originally a character from Todd McFarlane’s Spawn, created by Neil Gaiman, and who was purchased and repurposed.

Now Angela has her own series, which has had a couple of recent incarnations.  Her birth as a regular character came from Thor and a certain large crossover event, and with all the chaos in the recent Secret Wars universe shattering, Angela actually has an interesting thorough line for those who want to read it through.  With this in mind, we decided to put together a complete reading order for the contemporary Angela character that will bring you up to today.

Wolverine pulls Angela out of Heven, so it is sort of the first appearance.  Optional for the new series

This is entirely optional, but could give you a good foundation for the Asgard mythos.

This is again, optional, but important if you want to know everything in the coming volume

This series introduces Angela as an offshoot of Thor and of Asgard.

This series is Angela’s stand-alone and does not necessarily need to be read along with the Thor series of that time, which is introducing the new female Thor.  It is a regular ongoing, but it broken early by Secret Wars.

This is a Secret Wars tie-in that is not necessarily tied directly to the ongoing continuity except that it is an alternate universe that is webbed together in Battle World.  It should still be read, and this is its continuity of release, but could theoretically be read separately if necessary.

As of writing this, the new Angela: Queen of Hel ongoing series only has a couple of issues, but we will update it as it goes forward.