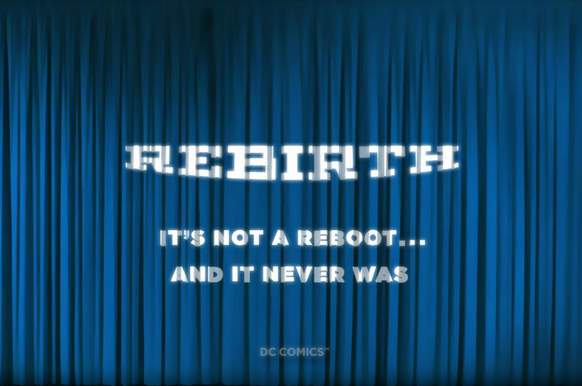 As the weeks go by we are learning more and more about the upcoming reboot of the DC Comics universe, set to start in June.  This reboot, which may be more of a massive sized “soft” reboot with only partial restarts, comes on the heels of an entire history of DC’s universe shattering, including Crisis of Infinite Earths, Final Crisis, Flashpoint, Multiversity, and Convergence.  DC is going to be kicking off this new event and relaunch with the book DC Comics Rebirth #1, an 80-paged book coming out a month before in May.

The book will likely be an event one-shot that will take us just through the events of the transition, but will not remain into the actual Rebirth relaunch.  DC’s pattern is to use relaunches as a chance to clean up continuity, use the multiversity concept liberally, and to then try and provide us with some reasoning that the relaunch is happening besides regular company practicalities.  The New 52 relaunch is not looked back on particularly strongly, mainly because of the lack of talent and the mixed way they tried to include some of the past continuity.  The post-Convergence soft reboot had some amazing titles and try to fragment the continuity in a great way, but since they were almost all secondary titles it did not bring in the talent and sales numbers needed to sustain it against Marvel’s complete post-Secret Wars reboot.

We still do not know what to expect with DC Comics Rebirth #1, besides what Geoff Johns has said about following the tradition set forward by Green Lantern: Rebirth and The Flash: Rebirth.  We know the issue starts with a picture of the world with a narrator saying “I love this world, but there’s something missing.”  Hopefully we can find out exactly what is missing soon.