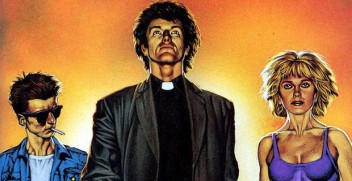 So we finally have it!

On Sunday, November 1st’s episode of AMC’s Walking Dead, the first episode of the Preacher television trailer was aired.  The previews shows Jesse Custer talking to a small boy about hurting his father over the abuse of his mother, interspersed with other acts of violence and Southern Hospitality.  We get a brief snippet of Cassidy, and what seems to be a couple other background characters, but not a ton from the comic.

So far it is looking like the series will shape up to be great, though it may be significantly different from the books in key ways.  This is kind of a mix bag really, but Seth Rogan and Evan Goldberg, who are bringing the books to television, have promised the basic story will remain and that we can stay happy with it.