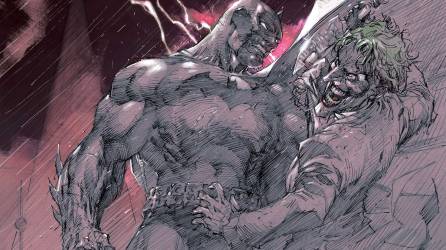 DC comics has had a tough end of the year run.  Not only did Convergence not live up to the anticipation, or come anywhere close to Secret Wars financially or critically, but its “relaunch” only included smaller titles and could not stand anywhere close to Marvel’s complete relaunch.  What has been doing well, however, is the large slate of miniseries that they have come out with, many of which looking at key characters in ways that are both in and out of continuity.  We decided to round up to see all of the miniseries that are active right now.

This has been, by far, the best selling comic at DC the last two months in a row.  It hit the number one spot in November and number two in December, only behind the final issue of Secret Wars.  The book is the third in the Dark Knight series from Frank Miller, this time co-authoring it with Brian Azzarello.  The reviews have been mixed, but the series has been great so far, besides the fact that DC is milking it for all its worth with numerous variant covers and a monthly “premium” hardcover edition that is coming in at $12.99.  This eight issue series started in November, which means, if it keeps to its schedule, it will finish in June.

This could be the best reviewed of the current miniseries, and is certainly one that we are Vertigology are hotly anticipating each month.  It is, as you might expect, a retelling of early Superman, this time telling little vignettes that put him in a hip light.  One issue shows him stopping criminals in Smallville, one accidentally filling Bruce Wayne’s shoes on a sea-bound yacht.  The writing and art are both crisp and fun, and this is exactly the kind of thing that DC fans have been waiting for.  This also started in November and runs seven issues, ending in May.

The Swamp Thing miniseries may not appeal to everyone, but for those it does work for it is going to be a heavy dose of nostalgia.  Written by Swamp Thing creator Len Wein it hails to the pre-Alan Moore days of Swamp Thing, focusing on the strange meta-poetic monologues of the character and its horror foundations.  The art itself, along with the prose, make it feel as though it is a post-EC horror comic, which has seen a new resurgence with many of the Archie horror books.  The first issue came out in January and will finish, again, in June, so get on now!

The Legend of Wonder Woman

January also saw the beginning of a new nine issue series called The Legend of Wonder Woman.  Like many others, it is an origin story that, so far, focuses in on Wonder Woman’s early years on her Amazonian home island.  It hones on the mythology and story-telling qualities to bring her up as an archetypal hero, and the alienation she feels in this world of our imagination.  This is beautifully drawn, almost appearing as cartooning, but it is a solid story that will introduce Wonder Woman both as her classic crime-fighting self and as the new mythological figure that more contemporary Wonder Woman stories have focused on.  It will finish in September.

Besides The Dark Knight III, Batman: Europa has been DC’s other surprise hit.  Coming in an amazing glossy format with painted interiors and a story by Brian Azzarello as well, the story looks at a partnership between the Joker and Batman as they trounce around Europe looking for a cure to an illness that infects both of them.  This is one of those books that feels like a solidly told Batman story, though it will not become legendary like they hope Master Race will become.  It started in November along with Master Race, yet will finish in the beginning of February.  If you have not gotten on board with it yet, you may just want to wait for the trade.

It may simply be that they want classic Superman right now since the regular Superman titles has him with limited powers, but this is a more pre-Flashpoint Superman figure and his relationship with Lois Lane.  This started much closer after Convergence, and it may actually help if you had read the miniseries.  It’s first issue was in September and, while we assume that this will be a miniseries, it actually has not declared yet if it is going to be ongoing or not.

This incredibly unique series actually started as an ongoing, yet with its strange premise it only found a very small audience.  It now is a 12-issue “maxi” series run that tells a story of intergalactic criminals in a sort of paleo-futurist story that reminds us much more of science fiction stories like Dune than traditional superhero fare.  This is a great turn for DC and shows the depth that they can bring in storytelling in their universe, so its unfortunate to see it only having twelve issues.  It began directly after Convergence and will be ending in May.

Also a post-Convergence release, Prez was slated for a twelve issue run, then reduced to six because of low sales, then moved back to twelve.  This has been an unexpectedly good piece of political satire set in the near future.  Prez has been a recurring character for years, a teenage boy that, for some reason, becomes the U.S. president.  Here we switch genders and focus in on the way that corporate money drives politics and capitalism feeds inequality.  The book has finished its first six issues and we are gladly waiting for the final six!

This has been a surprise hit whose first issue in December really dominated DC’s numbers while it was hiding in the midst of Marvel #1s.  The book puts the Teenage Mutant Ninja Turtles into Gotham in a fun, obviously out-of-continuity story.  Shredder teams up with Gotham villains, and Batman has to get on board with a little pizza to solve the criminal wave.  You can expect this to push more crossovers, like the popular Star Trek/Green Lantern crossover we got recently.

Now this might be as niche as it can get. Bringing it back to 1960s television, Jeff Parker’s work here builds on the fun of Batman ’66 and integrates the only newly resurrected Man from U.N.C.L.E. In classic team-up fashion, this crossover they must band together to go after THRUSH after Batman’s Rogues Gallery gets roped into their devious plan.

Its hard to actually call this a “miniseries” since it will end up with more issues than most ongoing series ever even get to.  Looking at around 50 issues, this is modeled on the previous Batman Eternal series that brought together people like Scott Snyder, James Tynion IV, and Tim Seeley for a weekly series that helps really flesh out Gotham and the rest of the Batman universe.  If Batman is your key DC character, then this is the book that you will have to collect and follow.

In a series of solicits that show how intended this book is to promote the upcoming Suicide Squad movie, this is following the sort of “fun team-up”mentality that many of DC’s recent books have had. Deadshot and Katana both are not incredibly well known villains/anti-heros, but this book is perfectly fit for Suicide Squad fans who really like their superhero books to be entertaining action. This six-issue miniseries started in January and will have its final issue in June.

This is going to be the fourth and possibly last installment of the Dark Knight universe from Frank Miller, which includes the first three Dark Knight miniseries, Batman: Year One, Batman/Spawn, and All-Star Batman and Robin the Boy Wonder.  This will begin while Dark Knight III is still going on, and is also co-wrote by Brian Azzarello and Frank Miller.  Little is yet known about the book, but you can expect the same intense apocalyptic feel of the rest of the series.  The book will actually tell an earlier story about the other characters before Batman returned.  This is also a unique entry on the list since it doesn’t start until April 2016.

Harley Quinn and Her Gang of Harleys

Also building on the fact that anything with Harley Quinn will hit the higher class of sales figures for its month, this is pulling in another action team-up style book.  This series, which also doesn’t start until April 2016, sees Harley in trouble and her gang coming to help!  It promises to be light fun, just what has made Harley Quinn books so popular.