Out of the Marvel relaunch titles, Warren Ellis decided to take up a neglected character to resurrect.  This is a move that people often expect from Ellis, wait for a point of resurgence, find a semi-unknown character, and give it a radical treatment that he wouldn’t have gotten away with on a more beloved character.  This is what happened with Moon Knight in 2014, where he came on for six issue before handing it off to Brian wood for the next six, who handed it to Colin Bunn for the final six.  Ellis set a certain style, which was cinematic and light on dialogue, but he was really only committing to the book for the opening arc.

This is exactly what he committed to with Karnak, a relatively unknown military-type character from the InHumans.  The vicious leader was something he was preparing for, and on his own blog and social media he mentioned reading a great deal of nihilist philosophy to give it the bleak tone.  He specifically mentioned speculative realism and the nihilism of Peter Sjostedj-H and Eugene Thacker.  The character himself is not really an InHuman, instead studying at the Tower of Wisdom until his perceptive ability became violent.

Ellis penned the first issue of Karnak that was released the very first month of the All-New, All Different Marvel relaunch that came after Secret Wars, which was October 21st.  Since then, many of the other Marvel titles have come out and started to increase in numbers.  Karnak, on the other hand, hasn’t moved and is the only book that has stalled completely at the first issue.

In a recent Comic Book Resources interview with Marvel Editor-in-Chief Axel Alonso, he discussed the hold up and its prospects for returning.

Curious about the status of Warren Ellis and Gerardo Zaffino’s “Karnak” — it was one of the first All-New, All-Different Marvel titles out the gate back in October, but issue #2 has been pushed back multiple times, and is now scheduled for release in February. What caused these bumps in scheduling? And is the book back on track for #3 and beyond?

Alonso: There were some unforeseen complications in Gerardo’s life. But we’re committed to continuing the book and everyone is working hard to get the next issue out for fans as quickly as possible. Our creators have lives outside of comics, and sometimes those lives have difficulties that can get in the way of writing or drawing. Right now, issue #2 should ship in February and will hopefully come out more regularly beyond that. In the meantime, here is a new page from issue #2 to whet your appetite. 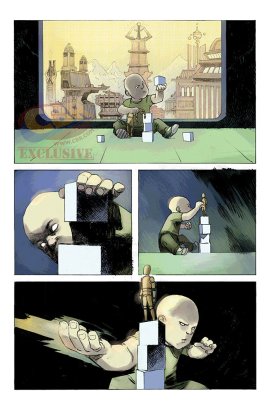 Hopefully this means the series will resume in the next couple months, and we can at least get that great first six-issue arc that Ellis is so well known for.  We also send our best to Gerardo, and hope he is well.