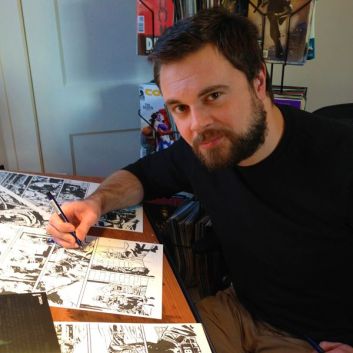 The newest Vertigo line-up was created to try and map what the growing non-superhero world of mainstream adult comics was doing, which means mainly coming on the heels of Image. The focus on creator-owned titles meant a huge focus on mini-series, which brought some great and unusual titles into the fold. One of the lesser-discussed gems is The Sheriff of Babylon, originally named The Sheriff of Baghdad in the first issue. While the storyline set in the Iraq warzone was reminiscent of other great post-war titles from Vertigo, the art by Mitch Gerads got DC noticing.

This is what pushed them into signing an exclusive deal with Mitch Gerads last week, bringing him onto Vertigo and DC titles as a name talent. DC Entertainment’s Co-Publisher Jim Lee’s mention of this showed that Vertigo is being seen as a company staple at DC into the future, and they are thinking about name talent for these books in the same way that they do for their superhero line.

As our talent roster continues to expand, it’s exciting to see that we’re stocking it with some of the best writers and artists in the industry today, and Mitch Gerads is no exception…His style is the perfect complement to Tom King’s gritty storytelling, and I can’t wait to see how Mitch tackles other Vertigo and DC projects in the future.

What this also suggests is that Vertigo titles may start to bring on properties that are not creator-owned since exclusive deals usually are to bring name talent onto characters that they do not own. This could mean the return of staple Vertigo characters like Swamp Thing or John Constantine, but they also could simply be wrapped into the new adult-themed superhero imprint Young Animal.